It was the summer of 1984. I was 24 years old with a college degree major in communications and a minor in philosophy.

I could write ads and explain Plato, neither of which showed up in any job market. While figuring out what to pursue in life, I searched the newspaper ads for work. I needed money for my apartment while looking for my dream career — maybe as an author. I could see it now, receipt of a plaque in my golden years: “Writer of the Year.” I looked forward with great expectations.
In the meantime, I needed some dough to pay bills.

A bunch of ads read “construction position available. Experience needed.” As a kid, I once banged together a few pieces of waste pine to make a toy boat. I was experienced. My first call only lasted a minute. “Can you start tomorrow?” the builder asked. I told him that was no problem.

“Okay,” he said. “Bring your full tool belt and show up tomorrow at 7 a.m.” He paid five dollars an hour — thin but enough. In the meantime, I would continue looking for a real job. First problem was the tools. I didn’t have any. My dad had some stuff so he gave me a hammer, screw driver and some nails. At a hardware place, I bought a tape measure, a short hand saw and a toolbelt. The belt was super-stiff, which I assumed would be an admired look. I wanted to appear important. Maybe a good raise would be offered quickly. 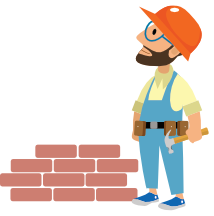 Day number one began full of funny looks. My dad’s loaned hammer was for finish trim and we were framing three story condos. A guy loaned me a spare until I bought the right kind, about twice as big. The new tool belt jumped out like a pink giraffe. A story that it replaced my overly used previous belt would be an obvious lie. And I apparently had it on backwards. So they started me out slowly. The condos were three stories high.

Workers would shout down stuff for me to hand up: “Newbie, bring us up two dozen wall studs.” Wall studs. What length are wall studs? I called up and the framer leaned over.
“Umm, how long are wall studs?” “See my hands?” he responded. “No? That’s because I’m hanging
onto wall studs not to fall out of this ****ing window.” Gotcha.

Another dude was roofing two units over and yelled my way for coil nails. He was using an air hammer (first time I’d seen one of those) and I found a big box of connected nails. I put a dozen of the strips in my work belt and started the three-story climb. Halfway up, the nails snagged on a ladder rung and I lost a bunch of them. I climbed back down to get more, then made a second trip up. I finally reached the roof edge, out of breath but successfully making my delivery. The roofer came over, held up the flat 12d framing nail strip, then showed me his roofing gun with a round section for a coil of roofing nails. Back down I went. Morning break was at 10 a.m. They all chewed snacks and joked, mostly towards me.

I smiled, hoping it was all friendly. Same thing at lunch when I learned you bring your own food, which I hadn’t. A few of the nicer ones gave me handouts, often with a stinging phrase causing a laugh from the group towards me. And I deserved it. The sky was blazing in the afternoon as I reddened in front of the others. They wore hats, gloves and sun lotion that I lacked. My shopping list for needed stuff was getting long. The company boss showed up near the end of the day to check things out.

Then he turned to me, looked up and down, asking if I would be back tomorrow. “Yep. See you then.” And I did for years until I eventually bought the company. The rest is history and I’ve written several snippets for your amusement. I never got work in TV , radio or writing, except these little articles. But I don’t miss that. I see building as a profession with as much challenge as any other. Each year gave me more experience, the good and the bad. You learn from both. I even got an award in my later years: “Builder of the Year.” I now look back with deep pleasure.

Paul Morin is president of Tarkka Homes Inc. in Hopkinton, NH and a partner in The Abacus Group, a lobbying and consulting firm in Manchester, NH. In 2009, he was the first residential builder to receive the New Hampshire Construction Industry Ethics Award. He was asked to write a satirical article for The Finish Nail and directs all offended readers to the publisher for apologies.