The success of women-owned building firms in the Granite State, and the proliferation of organizations designed to increase their presence and act as mentors, is proving that a woman’s place is on the job site.
Women have made, and continue to make, great strides in many segments of the business world. The building trades are no differ- ent, though advances have not come quite as quickly.

According to national Bureau of Labor Statistics compiled by the National Association of Women in Construction, women working in construction account for 1.3% of the entire U.S. workforce in 2015. By the end of 2016, roughly 939,000 women were employed in various areas of the construction industry, making up 9.1% of the building trades’ workforce.

However, more than three-quarters of those jobs, or 76% were either in sales and office positions or management. By comparison, fewer than 23% of those women worked in construction, main- tenance or service jobs.
Manchester Mayor Joyce Craig, the first woman elected to lead New Hampshire’s largest city, said those percentages are likely to increase as the building trades sector grows.

“It’s important to see women in a variety of roles, especially those that for decades have traditionally been seen as men’s roles,” says Craig. “Women have always belonged in leadership. We should have always had a seat at the table.”

Asked to quantify “progress” in terms of women in the work- force, especially in leadership roles, Craig didn’t mince words: “Progress is when a question like this no longer needs to be asked, and women have the same opportunities as men in the workplace.”

Cheryl Tufts, president and owner of Concord-based 3W Design since 1988, represents a number of women who “kind of fell into this career,” she says. Tufts started to work for a large construction company in 1984, “and they quickly found out I had an affinity for project management.” The on-the-job education she received was “invaluable,” she says.

“I never really thought about the fact that I’m working success- fully in a male-dominated field,” says Tufts. “I’ve worked hard, con- tinued my education, and remained flexible to weather all of the ups and downs our industry has had. I also have a terrific husband who gave the support and freedom to grow.
“My office consists of all women and there isn’t anything that we can’t do,” she says. “We run our forklift, we carry heavy objects, drive trucks — I can’t think of one thing we can’t do.”
Similar to Tufts, Tricia Morin, president of Tarkka Homes in Hopkinton, has worked in the trades since 1990, drawn to the concrete results that the field offered.

“When I was on-site in the field, I truly enjoyed being able to end the day looking at something tangible, something I created with my own hands,” she says. “It was extraordinarily rewarding and perhaps even just a slight ego boost to show that even ‘just a girl’ could compete with the big boys.”

Over the past three decades, Morin has witnessed a distinct shift regarding women, and how they’re viewed in the trades. “I think there’s still a stigma surrounding women in construction, but it’s much better than it used to be,” says Morin. “I’m seeing a second generation of highly intelligent, effective women doing a
fantastic job of running their companies, businesses and job sites. 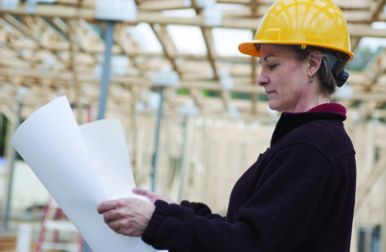 “What I still don’t see is a lot of women actually on the job sites within the different trades. Much of this has to do with a lack of
younger generations getting into the trades, so I can’t say it’s just
women. We have a sincere and urgent need for skilled tradespeople, period.”

In fact, numerous trade organizations are looking to women to
help fill a growing shortfall of capable employees in the workforce.
But there are obstacles, both real and imagined. In a Nov. 5, 2018,
article in Curbed entitled “W omen are the solution to the construction industry’s labor shortage,” Katrina Kersch, chief operating officer of the National Center for Construction Education and Research, said: “There’s a perception that it’s not an industry friendly
to women.”

Kersch told Curbed that there were many reasons for that, from the scarcity of images depicting women at work in the industry to stereotypes of male construction workers as unwelcoming to women. She also noted that there was no “clear path” for women looking to get into the business.

The lack of a clear path can be traced to two overriding misconceptions about the trades, says Morin. The first is that people get into the trades because they can’t do anything else. The second is that trades aren’t seen as a viable career option. Children — both boys and girls — are being urged to go to college, without even
considering a trade school.

“Women are breaking down gender barriers all the time, but just
not fast enough to fill the needs,” says Morin. “Are there opportunities? Absolutely. There are trade programs, scholarships, apprenticeships and ready positions available. Can you make a good living?

Definitely. Is it hard work? Undoubtedly, yes. But all things worth striving for take time, energy and commitment; the very definition of hard work.”

Interestingly enough, the pay structure for women in the building trades provides a much more level playing field in the workforce. While most women still lag behind men in the same positions — roughly 80 cents on the dollar — Bureau of Labor Statistics show that women in the building trades make 97 cents for every dollar a man with the same job earns. Translation? If you can do the job, it doesn’t matter if you’re male or female.

Cristine Burke, co-owner and director of sales and marketing for Burke Emergency Restoration in Manchester, has been in the trades for the past dozen years, since leaving her job as a marketing director for a Manchester software firm and joining her husband.

She says her work “has been extremely rewarding” and that she has hired both men and women, but acknowledged that “the property restoration industry at large is a very male-dominated industry, both in terms of owners and workers.” 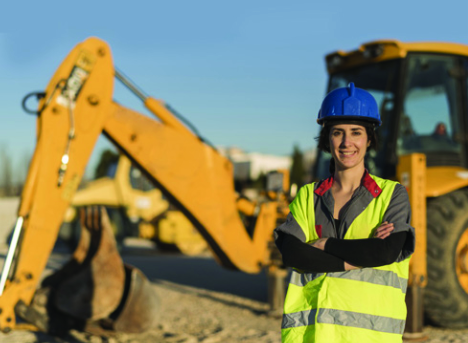 Most importantly, women have proven they’re up to the task, she said.

“The work is extremely demanding, physically,” Burke says. “But I can tell you that, more often than not, the women outperform the men when it comes to organization, communication and thoroughness of the work.

“I would whole-heartedly encourage women to pursue opportunities in the trades if that’s where their passion lies,” she says.

“As more women enter the trades, I believe they’ll be more widely accepted.”

Marie Degulis, business development manager at Manchester-based Secondwind Water Systems, which
was founded by Christine Fletcher, says she focuses on the job at hand, and whether her company can provide solutions to its clients. Gender, she said, doesn’t enter the equation.

“Male or female, an interest in the topic of water quality, a drive to learn the details and a personality that can communicate the details, are requisites for success,” Degulis says. “I truly don’t pay attention to this detail of women versus men. I work with those that want to utilize our expertise for their success.” Simply, Morin says she would “encourage girls and women to follow their dreams, goals and careers in which they find fulfillment.”

“There are so many different aspects associated with our industry. Try everything, settle for nothing! If they’re interested in a career in the building trades, I would encourage them to spend time meeting with different companies and their specialties. Volunteering with a group that provides peer to peer advisement or getting involved with a non-profit housing group such as the New Hampshire Home Builders Association — or one of their local associations — is a great way to gain insight and decide if this is an option.” Like many of her colleagues, Degulis says one key factor to introducing women to the trades is by introducing girls to applicable courses in school.

“Workforce development in high school, which is supported by NHHBA, is the best way to support women in our workforce, in my opinion,” Degulis says. “One has to try it to know they like it, right?”

Freelance writer Brion O’Connor is a product of New Hampshire schools — Manchester Central High School and the University of New Hampshire. He currently resides with his wife and two daughters on Boston’s North Shore.

The labor shortage for the remodeling industry continues to impact the industry, according to a recent survey by the National Association of Home Builders (NAHB) Remodelers.

NAHB released the survey results, which highlights availability of labor and subcontractors, to kick off National Home Remodeling Month in May.

“The labor shortage continues to be one of the top concerns for remod– elers across the country,” says NAHB Remodelers Chair Tim Ellis, CAPS, CGP, CGR, GMR, Master CGP, a remodeler from Bel Air, Md. “An ongoing challenge for remodelers is keeping their prices competitive while deal– ing with the increasing costs of labor.”

In the survey, remodelers reported a ‘serious shortage’ or ‘some shortage’ of labor for the following jobs:

Remodelers also reported leading effects the labor shortages have on their businesses:

“Working in the remodeling industry provides job security and high wages,” Ellis says. “NAHB is attempting to change the stigma of working in the trades by increasing awareness to teens and parents, and provid– ing them with education and the skills they need to succeed.” 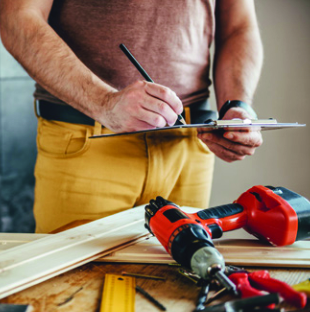