Posted at 19:48h in Magazine by admin

How to take the best possible photos with your cellphone

First and foremost, ALWAYS HOLD YOUR PHONE HORIZONTAL when taking photographs.  Whether on screen, in print or in a large format setting, photos are almost always displayed horizontally, so it only makes sense to take them the same way. 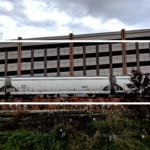 The most important part of taking a good photo is to make sure the exposure is set correctly.  Without getting too technical, exposure is the amount of light that reaches your camera sensor, and it is a crucial part of how bright or dark your pictures appear.  Smartphone cameras automatically set the exposure so that the brightest part in the frame is in focus and clear.  When taking photos outside, this results in a high level of contrast between the sky and objects that are not in direct light.  Fortunately, setting the exposure on smartphone cameras is easy.  Simply tap the part of the photo you want to be in focus/well lit and the camera will automatically adjust.  The example below is actually two photos laid over eachother.  The  right side of the image is the default settings.  The sky is a crisp blue, but the building and all of the foreground is dark and lacks detail.  On the left side, the building was tapped on the smartphone screen to set the exposure and allow more light in.  The sky is a bit washed out, but you can see much more detail in the building.